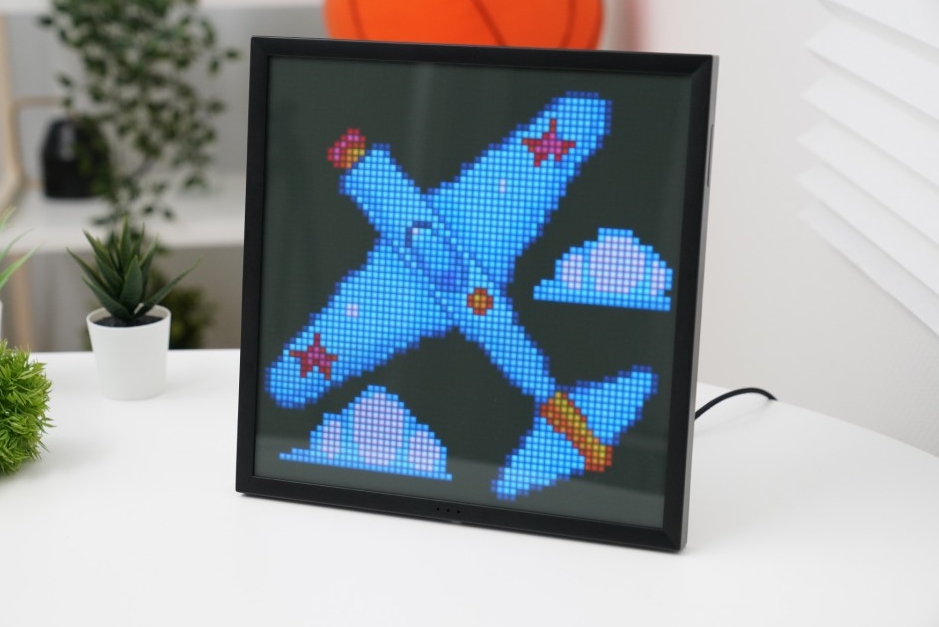 I think a picture frame would be a great accessory to effectively change the atmosphere in the house.

Changing the overall look of the room costs a lot of money, but turning it into a single point prop is one of the simplest things.

In order to change the atmosphere of the room, I think I searched for products with a retro sensibility because the digital picture frame that is the same as others looked unfortunately.

​ The DIVOOM I used this time can enjoy the hip feel by using pixels, and functionally, it went through the previous generations and came out to the 3rd generation, so I was curious about the feeling of use.

When I received the item, I think there was a lot of curiosity and anticipation as it was the first interior frame I had ever used.
​
I found it attractive to be able to use the pictures drawn on the top of the package in various patterns on one device.

​
As you can see from the Pixoo 64 in the upper right corner, it is made up of 64 pixels in width and length, so it is interesting to see photos and GIFs with a retro sensibility.

The ingredients were simple. With the device, there was a USB-C type wired cable, instructions, and a protective film.

Visually, the size of the device is similar to the size of a small cushion. It might be a good idea to check whether it is suitable for the space you want to use by placing it at 26.2 x 26.2 (cm).

The thickness is 1.8cm, which is rather thin, so I like it more than I thought.

Looking at the back of the device, there are two main ways to use DIVOOM.

You can see the VESA hole on the back side, and I was able to use it as a wall hanging on the wall when arranging the picture frame.

It can be seen that there is a separate cable holder as it is used as a ‘wired’ cable charging instead of a ‘wireless’ around the VESA hole.

It was nice to be able to use it neatly to match the surroundings when using it.

Since it can give a different feel depending on how you place it, you might want to think about how you’re going to use it.

In addition, I was able to see a 4GB micro SD card and a USB-C type port.

You can save and use photos or GIFs independently so that you can use them anywhere in the space, but it seems to have a larger capacity than the previous 512Mb, so it seems convenient to save more and use it.

How to use D-boom digital picture frame

How to use the Dboom digital picture frame was simple.

First of all, it can be used interchangeably with any smartphone device.

You can try using it in conjunction with Pixel Art by installing Divoom: Pixel art community from Apple’s App Store or Android’s Google Play Store.
It is attractive that various users all over the world can download and use D.I.Y. art according to the frame of the D.I.Y.

​ Being able to use a standalone art platform is enough to give you satisfaction.

Device connection is done by [Add Device] on My Page, and you can try using it by connecting to your space via Wifi.

I think it would be good to check if your Wi-Fi router is dual-band to connect without any errors and then proceed with the connection.

The Dboom digital frame, which can be easily connected and used, seems to be highly useful.

​ Depending on the situation, I could easily download it and try it out, but I think it’s better than I thought to be able to add a retro sensibility compared to general paintings.

I was able to see the pictures on the screen with clearer picture quality and brightness compared to the previous 1st and 2nd generations, and I thought I could use it as a device to express myself without any burden.

If you use the app, I think it could be more fun to try. You can create a creative space image by loading the albums in your smartphone and transforming it realistically in a pixel format.

​ I’m not good at drawing, but I can express not only pictures but also text on the app, so I can make my own images. You can fill the space with pixel art, but I think it can be used smartly because it works with Wifi.

It can be used as a social media tracker by displaying the basic screens such as time, weather/temperature, etc., in real time by linking with a smartphone, and displaying the information of SNS of one’s account such as Twitter and YouTube in real time.

Overall, I think it was enough to satisfy my curiosity and expectations about using a digital picture frame for the first time personally.

A product that allows you to decorate a space that looked boring with a stand and wall hangings, while sharing and using the art of various users with clean image quality, or even a SNS linked tracker that can be used smartly depending on the situation. I guess it wasn’t. 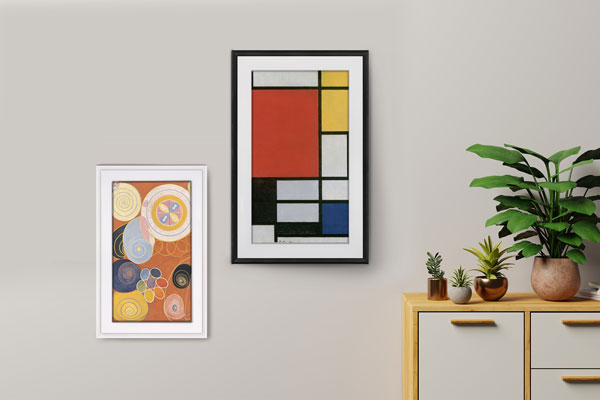 Netgear will present hundreds of additional abstract paintings by world-famous Mondrian and Kandinsky through its new concept digital framed Mural.

Mural Digital Frames is a new concept digital photo frame that has signed a partnership with 54 famous museums and galleries around the world and allows you to view 30,000 masterpieces and photos without limit. In particular, the Mural Curation Team organizes libraries by various themes, art trends, artists and museums for beginners who do not have specialized knowledge in art, so anyone can easily search for works and receive recommendations.

The Mural Digital Frames membership, which allows unlimited viewing of over 30,000 famous paintings and photographic works from around the world, can be extended by one year. In particular, Mural membership members can purchase works by contemporary artists individually, and can personally keep for a lifetime at a cost of only 2,000 won to 3,000 won, a 50% discount per work.

Add a touch of atmosphere to your office with a digital picture frame.

Netgear Mural Digital Frames is 100% Wi-Fi enabled and can be set up, managed and used on a PC as well as a smartphone. In addition, it supports cutting-edge digital functions such as a scheduling function that allows you to change playback works by time and day of the week, an automatic light sensor function, and a gesture function operated by hand. In addition, True-Art technology, which realistically expresses the vivid brush strokes of oil paintings, and anti-glare technology, which minimizes light reflection, make you feel the analog sensibility and genuine vitality that cannot be found in existing digital picture frames.

Where to buy Mural Digital Frames 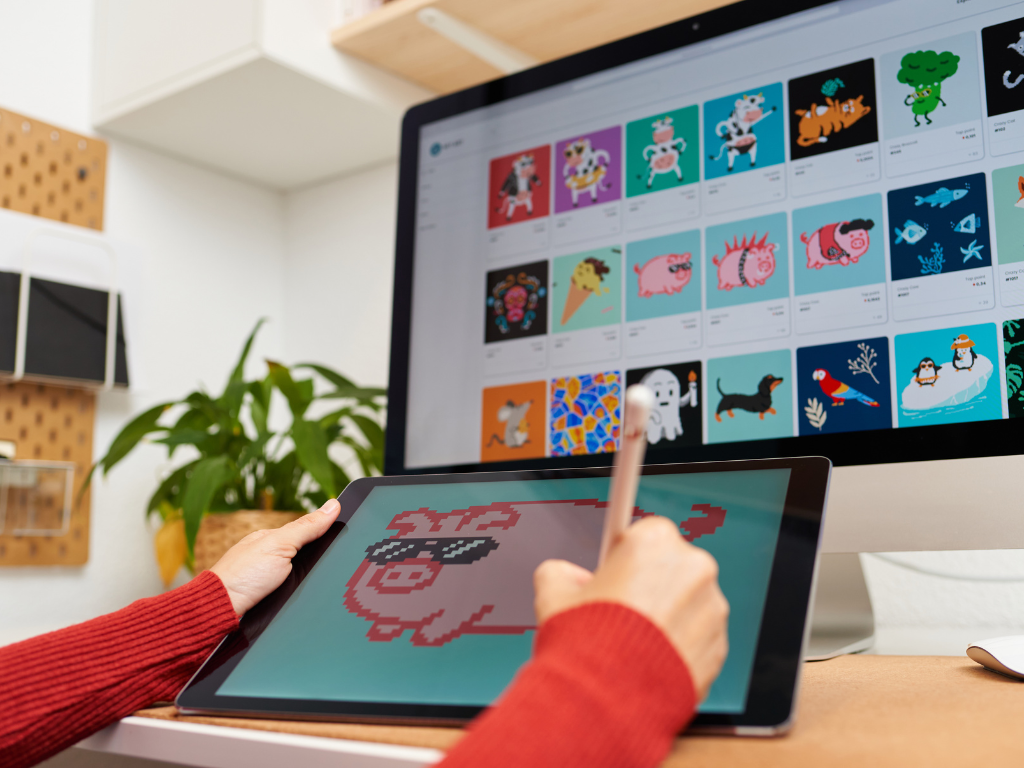 Kakao’s blockchain technology affiliate Ground X announced on the 27th that it has signed a business agreement with Lfactory to provide digital art and NFT appreciation services.

Under this business agreement, the ability to appreciate works purchased from “Klip Drops,” a digital art and NFT distribution service, will be provided in July with L Factory’s digital frames “Blue Canvas” and “Ativia.”

While existing digital frames are directly linked through external storage devices, L Factory’s blue canvas and Atvia digital frames are wirelessly driven through mobile apps, increasing user accessibility and convenience, leading to a virtuous cycle that is important for service growth between the two companies.

Users will be able to view their digital art and NFT 즐런가이드-러베스트오피(2runbest.net) collections on digital screens of various sizes by linking Clip Drops and Blue Canvas. Both companies are also planning to cooperate with offline exhibition displays in the future.

An official from Ground X said, “The agreement with El Factory will allow digital art to be appreciated in real life like existing art exhibitions,” and added, “We will expand the appreciation experience and provide various benefits so that Clip Drops users can feel the new value of NFT and digital art.”

“In order to overcome incomplete elements of the NFT market and continue to develop, we need to increase the collection value of collectors who own works to expand opportunities to enjoy and experience works not only in virtual spaces but also in daily life,” an L Factory official said. 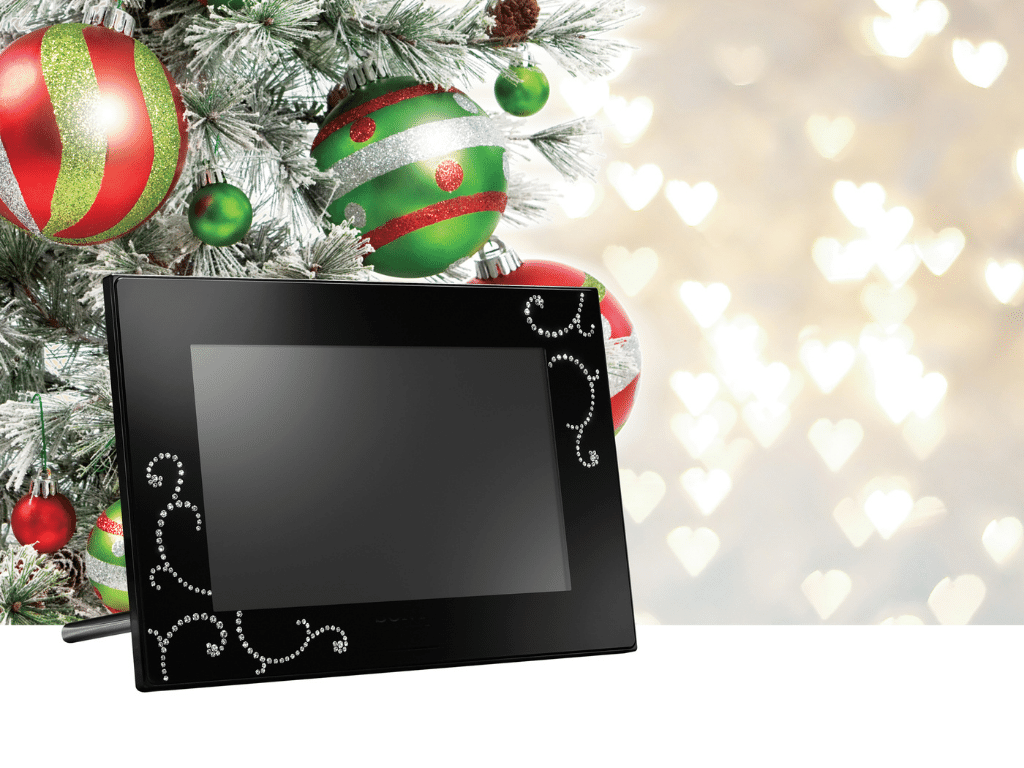 These blue canvases are a product in themselves and an art network service that started in the United States in 2009. In particular, we have supported the debut of unknown and new writers through these network services, and we have started related services in Korea since 2016.

a variety of work services

In addition, you can enjoy 2,400 famous works in museums and art galleries around the world, including Gogh, Monet, and Picasso, at home, and regularly receive domestic galleries and works of various themes through free and subscription services.

You can connect to the server through Wi-Fi and receive services, and you can use it after logging in through a dedicated app on your smartphone or an online web account. In addition, Blue Canvas is compatible with Android and iOS, so it can be controlled through a smartphone and can be easily linked to SNS.

Blue canvas comes in two types of digital frames: BC265 and BC49. BC265 is a 26.5-inch square frame, and BC49 is a rectangular frame with a long side of 49 inches. We adopted IPS display of LG with different resolution and support Wi-Fi and Bluetooth.

QHD-class high definition and high color reproduction rate allow you to feel the texture and color of the original painting. In addition, anti-glare surface treatment that does not reflect the surrounding light and a wide viewing angle that can be seen from any angle allows you to feel a more vivid sense of original painting rather than a digital frame.

Blue canvas can also be used as a frame-free no-frame option, but additional frames can be selected separately, such as walnut frames or mat frames, to give a more refined and sensuous atmosphere.

Users can edit images through a dedicated app. In addition, B49 models can be switched horizontally with the screen rotation function.

Instead of continuing to view only one piece, you can use the presentation mode to display the images you choose sequentially and pre-specified days and times to operate at the desired time.

Blue Canvas provides not only photos and famous paintings, but also various living information such as date, time, weather, and temperature through the widget as a digital frame. And these widgets can control their location and size through a dedicated app.

at the end of the show

The blue canvas package consists of digital frames, adapters, bracket sets, and frames. You can purchase it in a lump sum or rent, and you can choose various subscription services, so you can use the service according to your taste.

It’s not cheap, but if you place a blue canvas in a spare space, it can bring out the atmosphere and help the art world, so I think it’s a good service to try.